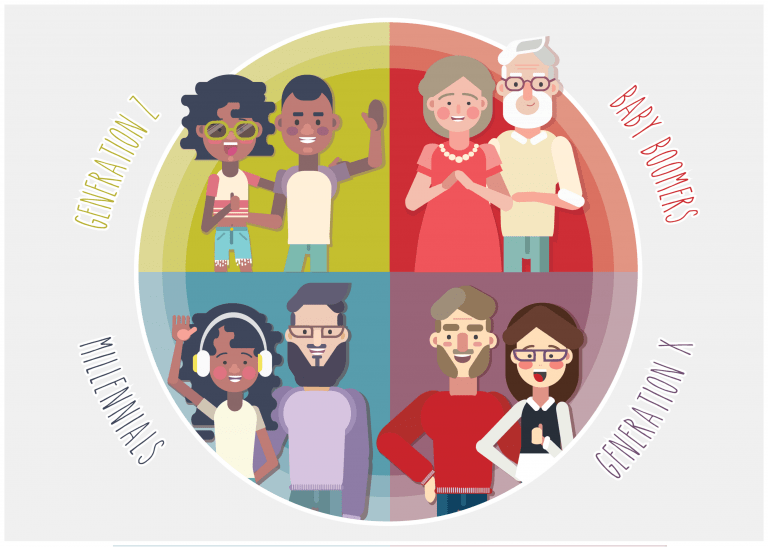 The “baby boomer” generation is often accused of having a loose – at best – grasp on technology. This, of course, is an unfair representation: the internet was still a largely unknown entity when most of the pre-1965 generation commenced their working lives. Generation Y, on the other hand, can scarcely imagine a life without it, having grown up in the digital age. Thus, more and more companies are taking steps to recognise the advantages associated with their employees’ diversity. Exploiting the advantages of this diversity and, at the same time, avoiding the associated misunderstandings and frustration, is an important task for businesses of the future. The key to success lies in facilitating networking between colleagues from different age brackets and backgrounds within the firm and allowing the exchange of opinions and information.

A boomer is defined as a person born between 1955 and 1969. However, the term boomer is not chosen at random: It refers to the baby boom after World War II.
Boomer generation compared to Gen Z and Y
Generation Z, on the other hand, follows the Millennial generation (Generation Y) and was born between 1997 and 2010. This generation is characterized by digitalization. Contact with modern technology and digital media already took place in early childhood for this group of people. These, so called digital natives, are often associated with the want for flexible jobs ans work hours, as well as a low retention rate. Look up here for a more detailed description of the different generations.

“Baby boomers have no clue about technology”; “Generation X (1965-1979) will do anything for money”; “Millennials don’t know how to separate their professional and private lives”. One thing is for sure: anyone seeking to understand the differences between generational cohorts in the job market today will run into more than their fair share of clichés. Although a few of these stereotypes are can be discredited from the outset, it cannot be denied that there are, typically, certain contrasts between employees from different age groups. These differences can harbour both opportunities and risks – for employee and employer alike.

Studies show that professionals from Generation Y (1980-1999) network more intensively with their colleagues, take more enjoyment in collaborative projects and have a desire to carry out meaningful work. When Generation Z arrives on the job market in the next few years, such trends are set to intensify. This is the latest point at which the fusion of digital technologies and the real world seems set to become complete – since for those born after 2000, there has never been any separation. For almost their whole lives, Generation Y have known virtual platforms and face-to-face contact as two sides of the same reality. Accordingly, they want employers to recognise this fact and allow room for the possibilities that arise from it.

Older employees, particularly those born before 1965, have different expectations. This is the cruicial point why the baby boomer generation is important. Many of them still see an individual office as an aspirational goal – both in terms of it being a status symbol and a place for independent, autonomous work. But this is not the only difference between older employees and the younger generations. Employees and managers who have been in the job market for longer are able to draw on in-depth market insights and knowledge built up over many years– knowledge that, in many cases, is accompanied by a higher degree of empathy than that displayed by their younger counterparts. Their values are also typically somewhat more conservative in nature, which can be of advantage when connecting with and understanding customers’ needs.

Based on their experience, it can be concluded that Baby Bombers are perfect mentors for new employees. Most mentoring programs do just that: An experienced employee takes a younger “mentee” under his or her wing. Thus, not only does the new colleague learn something, but the mentor is exposed to new ways of thinking and ideas. However, there are also “reverse mentoring” programs in which the new Generation Y colleague acts as a mentor for the older colleague. This can be particularly helpful in the area of digital media.

HARNESSING THE POWER OF DIFFERENCE AND RESOLVING MISUNDERSTANDINGS

As the example of mentoring programs shows, this generational diversity can be an incredibly important resource for any company. When organisations fail to properly acknowledge the diversity that exists among their workforce, they risk accidentally fanning the flames of misunderstandings between employees of different generations. On the flip side, when they succeed in bringing together skilled employees of different ages, a wealth of new opportunities can result.

In light of the above, companies must exert special efforts to build bridges between younger and older employees – by establishing a culture of networking, for example. Against this background, small steps often have the power to achieve more than grand but ultimately abstract concepts. Something as simple as a lunch or coffee meeting between two randomly matched colleagues of different ages could play a pivotal role in establishing an enhanced culture of cooperation.

TODAY, DIGITAL IS (ALMOST) EVERYTHING

While some of the commonly cited differences between baby boomers, “X-ers” and “Y-ers” hold true, there is one that urgently needs discrediting: the assumption that digitalisation has passed the older generations by. For a number of years now, baby boomers and a large proportion of Generation X have been using technology and mobile devices on an intensive basis – and this applies particularly to managers and highly educated technical employees. In collaborative contexts, too, older colleagues are getting ever better at making their voices heard. Companies can use this to their advantage by offering digital platforms as a jumping-off point for real-life networking. In so doing, they succeed in connecting older generations with younger ones – and everyone benefits, including the company itself.