From a “Work-Life Balance” to Genuine Fulfilment in Life 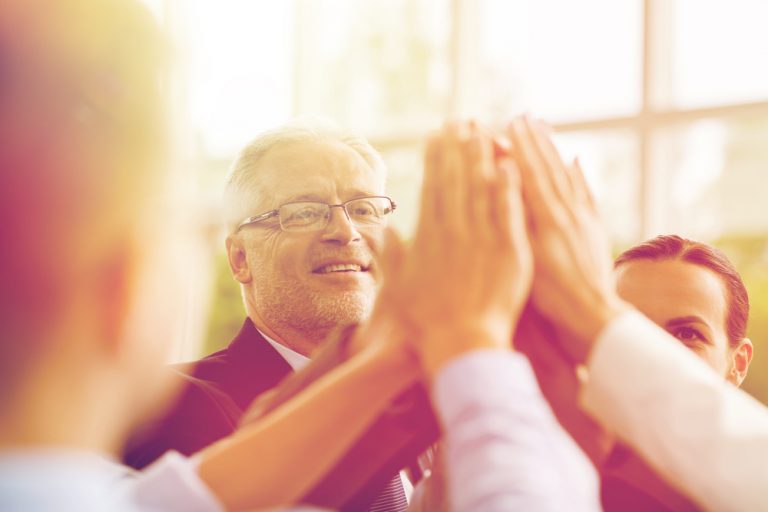 Work-life balance is a key consideration for the average employee – yet the concept itself is a questionable one. Is a strict demarcation between “work” and “life” really the most meaningful way of addressing the subject? In reality, “work time” is also part of our lives – and arranging the two in the way that suits us best is a highly challenging, yet essential task. One of the ways in which companies can support this process is by establishing a genuine culture of values. In doing so, they don’t just add value for their employees, but reap fundamental benefits for themselves, too.

Particularly in medium and large-sized enterprises in Germany, an unofficial state of “work-to-rule” is the order of the day. 70 per cent of employees feel a “low emotional connection” to their organisation – and they work at a level befitting this low degree of motivation, as shown by a Gallup study on employee satisfaction in 2017. *

20 years ago, employees and companies were able to get by comfortably on 9-to-5 jobs and middling levels level of job commitment. Today, the situation is fundamentally different. While skilled workers are seeking a greater level of job fulfilment than ever before – and, thanks to the shortage of skills, finding it ever easier to achieve their wishes – the developments of the digital revolution have necessitated a whole new standard of employee engagement. Thanks to lightning-quick technology cycles, companies now depend on employees developing solutions on their own initiative, championing pioneering projects and making quick, clear decisions.

Paradoxes of the working world

When the performance of skilled workers is measured by the amount of overtime they put in, the meaningfulness of the result is questionable. When employees deliberately suppress their productivity in the fear that otherwise, next year’s targets will be increased insurmountably, this is a paradox with even further-reaching consequences. In the corporate context, it is simply not sustainable. Faced with such phenomena, management, human resources and technical departments are faced with the challenge of developing meaningful guiding principles that serve the needs of both parties.

In a similar vein, it is recommended for companies to pursue a culture of “enabling” — which is to say that instead of standing over their shoulder with a time sheet, organisations should give specialist workers the space they need to develop their skills and shape their own working routines. If this is pursued successfully, employee loyalty can be significantly increased. Such an approach not only banishes the attitude of “work-to-rule”, but almost automatically increases the company’s innovative capabilities.

“Reinventing organisations”: How companies can rediscover themselves

How to measure or quantify such a culture of self-management? Among those to have proposed solutions is the management consultant Frederic Laloux, whose book “Reinventing Organizations” divided the corporate approach to value culture and employee appreciation into five evolutionary stages. These can be summarised as follows:

Authority (red): Describes companies who control their employees’ every move and in which the principle of “rank always win” dominates proceedings. The result is a climate of anxiety and mistrust. In the real world, however, this stage now appears to be the exception.

Control  (amber): Like the red stage, this is used to describe authoritarian organisations who rely overwhelmingly on formalised roles and strict hierarchies. Such companies see this approach as a way to guarantee stability and ensure frictionless processes. Again, like the previous stage, it is likely to be characterised by a range of authoritative entities.

Competition  (orange): “Competition is good for business” – so goes the mantra of almost all growth-seeking companies worldwide. They require innovation, clear goals and effective monitoring of results; key performance indicators (KPIs) determine the shape of day-to-day work. As a consequence of this, employees work together — but also, in many instances, against one another. While teamwork is much-lauded in principle, it is not always implemented in practice. A comparatively large number of companies are currently located in this stage.

Cultural values  (green): While competition does play a role in such companies, it is a background concern rather than a central one. Instead, emphasis is placed on shared values and individual motivation. “Empowerment” is a key means of driving productivity. Fair manager-employee communication –in which each party participates on an equal footing — not only features on the company’s business cards, but is also practiced in day-to-day company life. This approach is already standard practice in a number of the larger and more value-oriented organisations that have combined their economic growth with a sense of purpose transcending the merely financial aspects of their existence.

Self-management and a culture of trust  (teal): At this stage of the evolutionary process, “enabling” is the core principle upon which companies are based. Organisations are seen as holistic units, and employees enjoy high levels of trust. The primary purpose of management is to ensure that employees are able to pursue the route they have resolved to take. This approach is intended to lay the basis for innovation, which in turn provides the basis for sustainable growth. However, so far, it has thus far only been implemented in companies with a “trendsetter” or “pioneering” status. 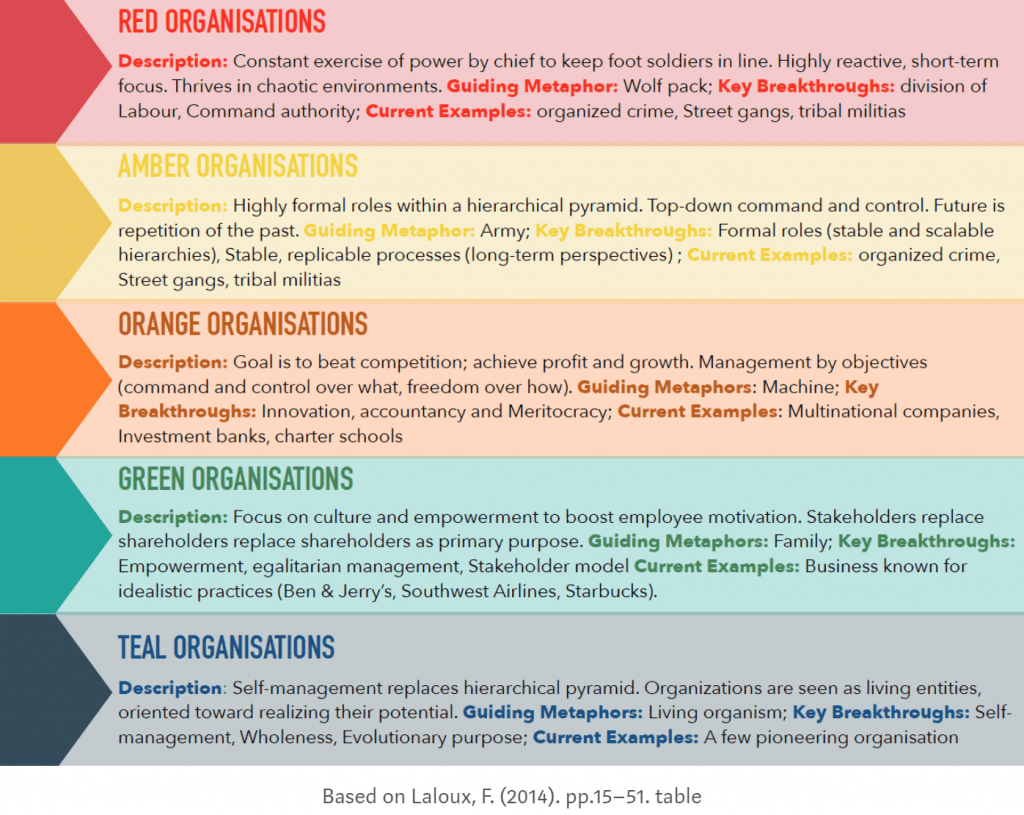 The right strategy is yet to be decided

What is the correct way to proceed, particularly in the case of medium-sized enterprises and company groups? How should they conduct themselves so as to be able to keep pace with the economic, technological, social and cultural developments of the time? Is it right to pursue a path in which the principle of trust and self-management is implemented consistently, without regard for currents and trends?

There is no right answer to this question; however, management and human resources in every organisation will soon face the pivotal task of defining their individual “status quo”. A vital part of this process is assessing the associated advantages and disadvantages of a particular approach; deciding whether or not self-management and individual responsibility are necessary and make sense within the organisation in question. They must also weigh up the extent to which the modification of management structures as part of the change process could bring about threats to the company’s financial stability.

The above-mentioned analysis forms the basis for setting new goals – and a long-term implementation concept is required in order for these goals to be achieved. Within the scope of such long-term planning, organisations can then introduce a range of measures to promote the practice of self-management. Four considerations should form the central focus in this regard – whereby the process of change is is not to be approached as a rigid, inflexible structure, but overseen and supported as a dynamic development.

Dismantling of hierarchies: To what extent do strictly defined roles and hierarchies assist in achieving company goals, and to what extent do they exist exclusively to serve the egos of the individuals involved? Usually, it’s the latter of these two options – and in a culture of self-management, this should no longer be allowed to be the case.

Abolishment of performance targets: While KPIs may be perceived as necessary in terms of revenue, the question persists as to whether targets can really be best achieved by following a rigid path. Goals and targets should always remain dynamic – and should never lose sight of the people carrying them out.

Giving up control: Nobody likes feeling controlled. While it’s true that some degree of oversight is necessary, when it happens too frequently, it becomes counterproductive. When employees detect a sense of trust, this usually spurs them on to do better. Their level of commitment increases and personal goals become more ambitious.

Increased offerings, not obligations: Training courses, new tasks, extra responsibilities – such things are perceived positively within a culture of self-management, so long as an employee actually desires them. In contrast, if they are handed down as decrees by a manager or supervisor, they have a demotivating effect. The effect of offering an employee extra responsibilities on a casual, no-pressure basis is often more favourable than the alternative.